Low code! No Code! Then why code? 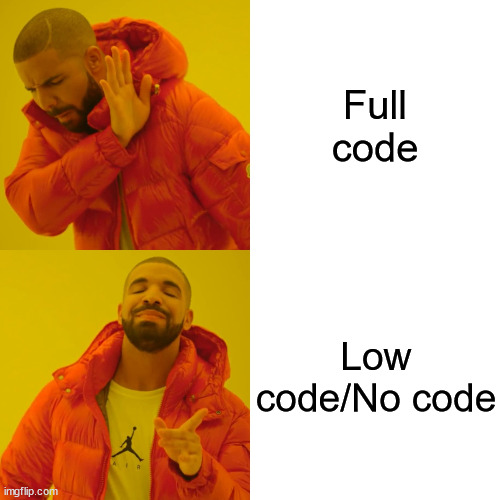 The no code/low code options are coming in, nice and easy. They don’t always make a big splash like the newest JavaScript framework. They don’t always give the open-source crowd nose bleeds that the newest JavaScript framework/newest language/newest stack/newest update of their favorite framework would do. The hard-core developers would scoff at these solutions especially when they would be told that these would allow someone with no coding knowledge to create applications faster than the hard-core developers would be comfortable.

Obviously, I am going to say all of this through the Power Apps tinted glasses. Initially, when I first came upon PowerApps, I thought this is no way to code. If you want to create software application (app for the Gen Z) you must type the code, compile, debug, curse, debug, compile, pray, curse, debug and compile again till it works. You just can’t drag and drop stuff and be done with it. But as I looked further, I found this to be good, useful even.

When you don’t write code, you don’t have to compile it and then debug it. That reduces a lot of headaches. Because there is no code, the hassle of supporting the code over time disappears, further reducing headaches. You can sleep peacefully knowing that nothing will break when the system is updated. And furthermore, the development time reduces considerably.

Also, because there is very little code or no code at all, reviewing that code is not needed. This greatly reduces the dependency on another expert developer who typically reviews the code and frees him or her up for other more important tasks.

I can’t stress enough about the no code/low code approach. Far too many young developers put far too much stress on coding. Many believe that being a superb coder is the path to greatness when the fact is still that coding is just one part of the software development process. And more importantly, it is still one of the most vulnerable parts. We remove this part or at the very least, simplify it, and we make the process that much easier.

One more point about Microsoft’s no code/low code approach is that the company wants to put the power in the hands of the end users. The approach is simple and fast enough to learn that any user who has no experience in coding can create an app for a particular functionality. That means the customer does not have to depend on their own, often overworked I.T. teams or a third-party software development company to implement a relatively simple but very much required functionality. And, if the end user knows Excel, which several people do, they can implement a relatively complex functionality very easily.

Perhaps the biggest advantage, at least according to me, is that the apps developed by this no code/low code approach which Microsoft calls Power Apps, is that they are mobile ready. The user does not need to put any extra effort into changing the app to make it run on a mobile. They work on both Android and iPhones. The user just needs to download and login to the app.

Another advantage from the point of view of the customer is that for simple apps, the customer does not need any extra license. Basic versions of Power Apps called Canvas apps are available with any license that gives the user the ability to use Microsoft Office.

Ready integration of Power Apps with Microsoft Office means Excel can serve as a data source for any app. If SharePoint is also included in the license, great. The user can use SharePoint lists as data source. Or upload documents to SharePoint directly from the app that he or she would have developed. The user can share the app with others who have the same requirements.

What do you think? Share your views in the comments.

Create a personal / system view in Dynamics CRM with all the fields on the form/s which you select for a particular entity using the View Creator.
http://www.inkeysolutions.com/what-we-do/dynamicscrmaddons/view-creator